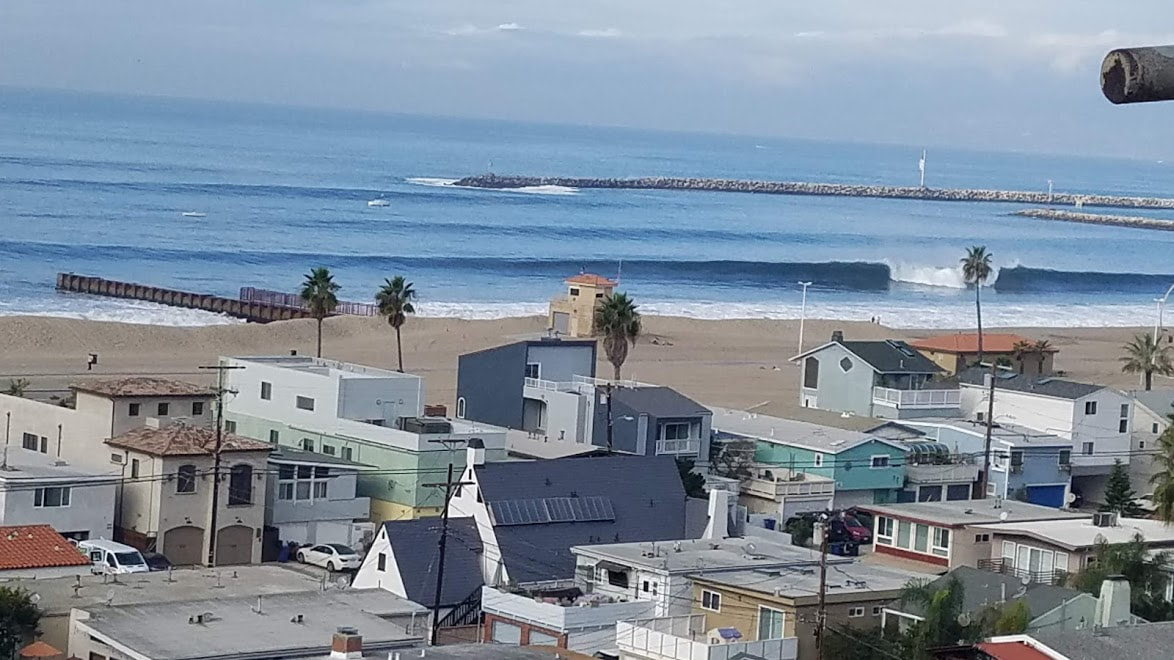 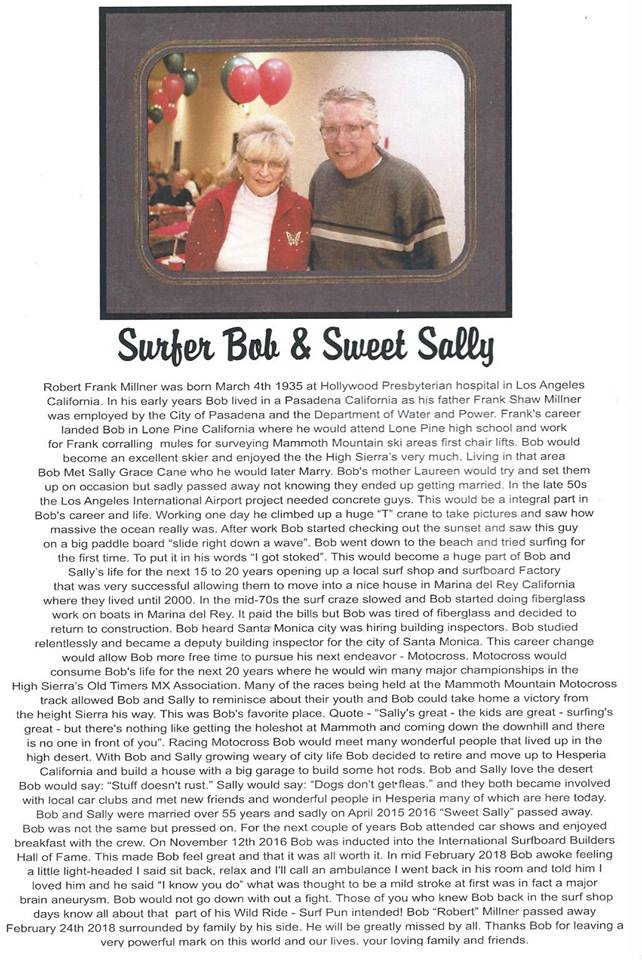 Perry Luth surfing at D&W... that is a jetty in Playa Del Rey.   circa 1968-70.     Photos supplied by Tom Stanton
Above right with the Evolution surfboard he made.

"Well, here it is another Veterans Day.... and on this day my thoughts always turn to Perry. Perry and I both got drafted back in 65 and we both went down to the LA Induction Center where we took our physicals.... I made it, but because of Perry's childhood accident with a big pipe, he didn't.

I went into the Army, went to Viet Nam and came back home in 68. Well some time passed, a few years rolled by when on one Veterans Day I got a phone call from Perry... thanking me, recognizing me for being a Vet. And since then, every year, Perry would call me on Veterans Day thanking me for the service I did for our country.

Perry was the only one, the only person that ever called or thanked me... recognized me for what I went through. Not even my closest family members or friends ever did that.. not even one time, but Perry faithfully called me every year on Veterans Day. Even in his darkest times he would never fail... and now, today.... for the first time the phone did not ring.
I will never forget Perry and what he did for me on every Veterans Day.... I will miss him."
Tom Stanton
Corky Carroll and Mike Purpus on Paddle board races during surf contests.
Fred Beckner, lifeguard and King of D&W​ 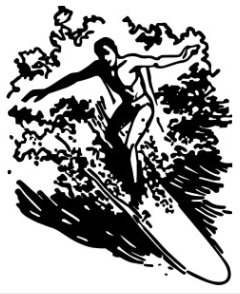 Fred Colby’s character in the story
Surfing Into Downtown LA
was based on the real life hero of D&W Lifeguard Fred [Coby] Beckner.
The real-life Fred was a true lifesaver. Lifeguard Fred Beckner often played a hero in Hollywood as well. He was often was cast as a cowboy or a police officer in movies, big and small, and was a close surfing buddy of Gunsmoke star James Arness.
In 1963, the Baldwin Hills dam collapsed and burst. Oil had been sucked out from beneath the dam for years leaving its foundation in a weakened state. Floodwater destroyed many homes near Cloverdale Boulevard in Inglewood.
Fred was among the lifeguards sent out for search and rescue mission in a Willy’s Jeep.
The Baldwin Hills Dam Disaster of 1963
In the Jeep with Lifeguard Fred (to help save lives and property in the Baldwin Hills area after the dam collapsed), were Marty Thompson, Former Lifeguard Chief Don Rohrer, and Bill Prewitt (retired lieutenant). They rode in a Willy’s jeep to respond and look for bodies and vehicles from Lincoln Boulevard and along Ballona Creek. Eddie Hoffman who was stationed at the Creek reported getting shocked in the water from downed power lines.

What really Happened to Lifeguard Fred?
As a lone mercenary, LA Lifeguard Fred secretly entered the western frontier of Russia, at Vyborg, in 1971. There he began his personal campaign single-handedly to “destroy the entire fucking-commie-bastard-empire… because they’re a bunch of fuckin’ greasy hodads.”
Two months later the heroic lifeguard was not only able conquer the Communists but he had also learned to master time and space, through the sheer power of “being pissed off at valley punks.”
Fred finally emerged from Russia’s eastern border near the Sakhalin Islands, with his original cigar still lit, and still wearing an official County of Los Angeles lifeguard jacket along with the signature red trunks.
Before he left the recently named Russian seaport of St.Colbysburg, he stopped to surf a few waves in Sakhalin’s 42-degree water using the stolen, frozen body of Stalin, which had been taken in full public view, from Red Square, as a surfboard. Before entering the water, Beckner lit up a brand new commie Cuban cigar. Fred Beckner’s “obituary” mistakenly said that he had passed away in the late 1960s, during a fierce battle with Poseidon. The epic sea battle took place after the egotistical God of the Sea lost his board right in front of the D&W lifeguard tower-like a fuckin’ valley kook, and dinged Fred’s new girlfriend on the shoulder.”
Both of the larger-than-life figures, Beckner and Stalin, have not been seen since 1973.
Many of today’s South Bay surfers will swear on a stack of hauraches that the original battered D&W lifeguard tower #5, with its shades still drawn, still stands at the storage area at back end of D&W beach, still rocks… and “smokes” on a regular basis. We believe that Fred’s successor, Mark Paulin, who has taken over the lifeguard duties at D&W with his wife Lorrell, is the reason for the smoking and rocking.
Mr. Beckner, himself, has probably taken his place within the pantheon of gods in Valhalla, where the waves are always bitchin’ and free of peroxide kooks.
Though he reminded me of a drill sergeant, the real Fred was never in the US  Armed Forces during World War 2, The Korean Conflict, or Vietnam. He fought his own war against the most “pervasive evil bastards” that he knew… “mankind’s most dangerous enemy.”
The Military knew Beckner, and realized that Fred would be more effective if they let him “fight the fucking greasy Hodads of the world” on his own terms.
Hodads bite!

The story of DJ Dukesherer  ...One of Playa del Rey's first Waterman

DJ Dukesherer’s path to becoming an author was less direct than the one that led him to surfing. Paddling the deep blue waters off the coast of Playa Del Rey with his father were a defining element of his childhood.

Mr. Dukesherer’s ocean roots sunk deep into the sands of Playa Del Rey. Through his years, he’s watched as sacred spots are paved over, developed, and forgotten. What’s left of so many of these places is only memory. In what can only be called a labor of love, he’s put together a paean to this treasured homeland: Beach of the King: Playa Del Rey/Westchester/Playa Vista, A Personal History.

Beach of the King is part history, part memoir, but all heart. As DJ says about his efforts to preserve what remains of this treasured spot, “I am looking to find a way to bring some positive education to the area, in hopes that we can avert any further madness.” In the spirit of that, he’s put together a local library series to support his self-published book, with a standing exhibit in 4 parts beginning July 12, 2008 and running through June 2009. The series is being sponsored by the Los Angeles Library, Playa Vista Branch. If you’re a local and would like more information, please leave your comments/questions below.

From Beach of the King:
When I was very young boy, my parents took us to the beach whenever they could, and we would spend long days on the beaches of Playa Del Rey, in Southern California. We knew three beaches there, at Dockweiler State Beach: Gillis Beach, Toe’s Beach and The Pits. It was like having a resort in your own back yard. We lived, then, about three miles from that beach. In those days, my father owned a very long–perhaps 18 foot–turquoise and speckled-white, hollow paddle-board. On sunny-hot summer days, he would paddle out at old Toe’s Beach in Playa Del Rey,  and cover miles on it; sometimes going as far south as Malibu, which was still accessible in those days. This was before the new channel was dug– that now separates Playa Del Rey, from Marina Del Rey and Venice Beach.

Some days he paddled in, and my brothers, sister and I would take turns getting rides on the paddle-board; skimming across the bay and getting terrible sun-burns. But it was wonderful to be floating on the deep blue water, with Catalina Island rising above the western horizon, and looking back and up across the beach and up to the palisades that rose up from the sea. It was as if the Divine was whispering: ‘Here it is;  what else could you possibly want?’

My father claimed that together we would one day paddle  the 26 miles to Catalina Island, just as ancient native mariners had traveled to there and from that exact same spot in small hand-built boats . . . .

Some journeys are never made, while others that we actually start take new directions. At a certain age, those dreams you have as a child, if not fulfilled, must be given up and you must move on. But many memories, some which haunt me still, remain . . . .

Built in a nest of land beside an ancient inland sea and dry lakebed, and surrounded  by high coastal bluffs, the Los Angeles International Airport and The Pacific Ocean,  Playa Del Rey and Playa Vista comprise the jewel in the crown of what was once a massive Spanish Land Grant. Bordering its northern border, a meandering and often misunderstood Ballona Creek: the former  Los Angeles River, now channelized with boulders barged in from Santa Catalina Island, dissects the remaining wetlands of the area. The largest man-made pleasure craft marina in the world: Marina Del Rey, follows the route of the creek to the sea.

The area, first inhabited by an indigenous people that arrived in North America about 8,0000 to 12,000 years ago, changed little for the great majority of that time. Of course most of North America remained unchanged before the arrival of the European, but as late-1800 California beach towns grew, attempts to develop Playa Del Rey were met with a series of disasters that I will outline in these chapters.

These events resulted in leaving behind a patch-work of small villages and neighborhoods that comprise the town today; a town that is now surrounded on three sides by some of the most densely populated area in the United States. Our tribe surfed the beaches here, and we grew up on them. Playa Del Rey seems to exist in spite of itself; and does so with very little regard to its Los Angeles parent. Later, I lived just off the beach, and there were times that I had to remind myself that I wasn’t on vacation. The town can do that to you. I can think of no finer place to live on the planet.

Without a doubt, the largest and most controversial recent change began in 1989 with the development of the former land and headquarters of the Hughes Aircraft Company; purchased by aviator Howard Hughes in 1940. The Playa Vista development, built at the foot of the Playa Del Rey/Westchester, California bluffs, sometimes called the Kentwood Bluffs, has amalgamated a group of disjointed: naturalists, dismayed logisticians and urban planners, ecologists and preservationists , whose rallying cry of “no more development,” has grown to sometimes hysterical proportions.

In the end, Playa Vista continues to develop alongside its older cousin, Playa Del Rey, creating one of the most interesting and hotly contested regions on the Westside of Southern California.

However, this town which was once four or five separate towns, has eventually merged back into one. And despite the many changes, over thousands of years, the Pacific Ocean and Ballona Creek have kept a constant metronome-like rhythm, counting  time with a certain and promising cadence. . . .